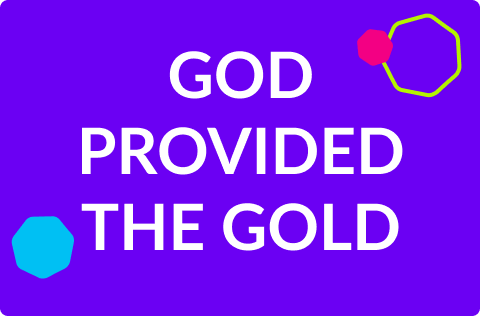 I was reading Matthew Chapters 1 and 2 this morning, and it struck me for the first time why the gift of one of the Three Wise Men was gold. After the Wise Men left, God appeared to Joseph and told him to flee to Egypt to escape Herod’s anticipated death sentence on all of the children under two in the region.

I’m very familiar with the cost, and preparation, associated with just a two-week vacation at the shore. I find it hard to conceive of closing my business, packing up whatever possessions my donkey can carry and moving to a foreign country with my wife and new-born son, where I will need to survive for an unknown period of time – – a place with a different culture, language, economy, currency and a long difficult history with my homeland.

Joseph needed funds for travel expenses, living expenses, and capital to restart his carpentry business. The necessary provision will need to be portable and universally recognized for its intrinsic value. The only asset that met those qualifications at that time was precious metals, such as silver and gold.

Just as God provided the ram for Abraham, He provided the needed gold for Joseph. We’re not told how much, but it was enough for the trip to Egypt and back, for their needs in Egypt and for Joseph to reestablish as a carpenter upon his return to Nazareth several years later.

Let’s also consider how God provided the gold to Joseph. It was through the gifts of godly men, the Wise Men, who He had blessed and who were willing to part with the gold.

I hope you have already figured out where I am heading. God still favors many of His children with wealth. He calls others to leave their occupations and go to foreign lands with their families to take jobs or start businesses as He directs. God also makes provisions for those who respond to His direction. This provision is in the wealth of His people, wealth which He has entrusted to them as stewards of His earthly blessings.

So, what are we going to do with the gold He has entrusted to us? Are we willing to lay it at the feet of Jesus like the three Wise Men?